You are here: Home / Business Email Etiquette / Essentials / Is it sneaky to use BCc: in business email?

In a recent conversation with one of my clients, they mentioned that they felt the use of the BCc: field was not polite. They went on to say they thought that those who use BCc: were “downright sneaky”.

This client was referring to an email where he was copied in the BCc: field of an email that was not a mass email. He didn’t understand why the fact he received a copy had to be hidden.

This left him wondering who else may have been BCc:’d. Commenting that they wouldn’t know he also received a copy.

The email was not on personal or proprietary topic. Nor was it something that would warrant “hiding” who was involved or aware of the conversation. Unless….

BCc: Can be Used Improperly

Here’s where the not polite sneaky part comes in.

He asked me “why wouldn’t you let everyone involved know who you copied if you did not have nefarious motives?” That question caused me to reply with a question. “Was there anything confidential or sensitive in the email? ” He answered with a resounding no and added that everyone who would need to know, knew each-other.

This situation comes up every so often with varying questions and concerns.

Then, why was BCc: used?

The best approach you can take is to try and determine the motive of the sender’s use of BCc:.

The latter could be good or bad depending on motives; while the former is the right thing to do.

Although, to clue in outside parties to conversations they are not part of or don’t need to be, certainly can be construed as questionable. Why else would they do so?

The Primary Use of BCc:

BCc: is best used when you are emailing a group of folks and do not want to expose their email addresses. Also, BCc: is a way of hiding an extremely long list of email addresses for blast emails where it really isn’t necessary to know who the email was sent to.

If the others that were BCc’d do not know each other, putting their email addresses in the BCc: field to protect the privacy of their email address is the proper thing to do. In business, however, outside of the reasons stated, it is the rare occasion where including others in a conversation is something to be hidden.

How to Add Others to the Conversation

Most in business emails do know each other or work together. Or at the very least are going to work together. Hence them being brought into the conversation or being informed. In that case, do an intro in your email:

No need to put Jane or anyone else in the BCc:.

The question then remains, what was the sender’s motive? We may never know. But that could ding the trust factor a bit if you make contacts wonder why you are shielding who is in the conversation.

Always think about why you want to BCc: before doing so. The last thing you want to be known for is being sneaky or an “e-Tattler”! 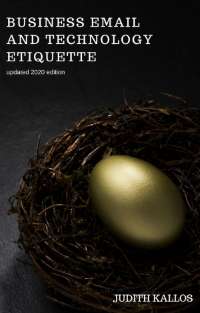