Anything you can do to ensure the meaning of your comments comes through as intended is okay. In some cases, quotation marks are used to clarify, albeit sometimes sarcastic, a point of view.

However, you may be leaving room for interpretation when taking the approach below.

Is it acceptable to emphasize a point in an email with quotes? For example: The people on the BoBoardre “elected” not appointed.

As used in this example, Quotation marks highlight a word that is used in an unusual way. In particular when you want to indicate irony, inaccuracy, or skepticism.

We are basically talking about the online version of off-line air quotes. When quotation marks are used in this way in writing, they are referred to as scare quotes.

What are Scare Quotes?

I bet you never heard of scare quotes, even though you’ve probably used them. Scare quotes are quotation marks used before and after a word or phrase to show that that particular word or phrase is unusual or perhaps not accurate.

The Chicago Manual of Style describes scare quote use as follows:

Quotation marks are often used to alert readers that a term is used in a nonstandard (or slang), ironic, or other special sense. Such scare quotes imply This is not my term or This is not how the term is usually applied. Like any such device, scare quotes lose their force and irritate readers if overused.

I got a kick out of the part noting overuse irritates readers. If you think about it, scare quotes are generally used in a snarky manner, right? Or in an attempt at humor. Just like off-line air quotes.

Writers use scare quotes for a variety of reasons. Scare quotes are used to imply an element of doubt or ambiguity regarding the words or ideas within the marks,[12] or even outright contempt. They can indicate that a word or phrase is being purposely misused or that the writer isn’t persuaded by what is being said, and they can allow the writer to deny responsibility for what is being reported. In general, they express distance between the writer and the quoted words.

The scare quotes here might indicate that the word is not one the writer would normally use, or that the writer has an opinion that there is something dubious about the idea of groupies or its application to these people. The exact meaning of the scare quotes is not clear without further context.

Email Emphasis Can be Tricky

In the above site visitor’s inquiry, I would take the use of quotes to mean that the author is concerned about the behavior of those on the board. Elected or appointed carry two different sets of anticipated behavior.

When tempted to use scare quotes, remember that you’ll make more of an impression with your statement if you use them sparingly. Also, relaying emphasis in plain text can be tricky because sarcasm is difficult to relay in writing.

That is why sarcasm should be avoided if possible, as it is subjective and open to interpretation by the other side. Only the very skillful can relay precise emotions with the written word.

There are other ways to relay innocuous emphasis. For example, for simple emphasis, use forward slashes like this:

Forward slashes are more explicit in their intent of use — emphasis. Want to be a bit snarky — go with quotation marks. But know that’s what you are doing so that you are not surprised by the recipient’s reaction to that effect.

So now you know what scare quotes are and how to use them. Not too scary, right?

If you want me to cover a question in a future post, feel free to submit your questions here. 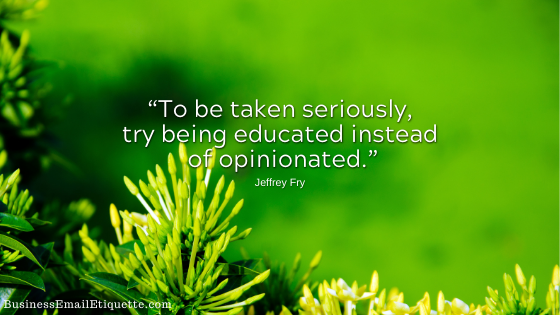