I constantly remind folks to use proper sentence structure and grammar when composing their emails, as my regular readers know. I pretty much leave it at that — I am not a grammar writer or an English language major.

But when investigating the use of ellipsis,’ there are some pretty visceral opinions out there. As in, you should never use an ellipsis for any reason. Authors and intellectuals tend to be stringent regarding proper writing practices. I get that — that’s what they do.

However, in my view, there’s a time and place for everything, and I don’t get wrapped up in hard and fast rules.

What is an Ellipsis?

An ellipsis, used to indicate the omission of a word (or more), consists of three periods usually separated by spaces. When used at the end of a sentence, the ellipsis only acts as the final punctuation when the sentence is deliberately unfinished.

To indicate that part of a quoted work is missing, a period comes first, followed by a spaced ellipsis.
Grammarly

To the pros, only the last part applies — when a part of the quoted work is missing. Period. (Although it the graphic above, Stephen King used an ellipse to add a pause in thought.)

I continually work on my writing skills and am always amazed at how much there is still to learn about communicating with the written word, which for business is critical. And I do my best to do my best.

But I am an ellipsis user, and my writing tool Grammarly nags me about doing so. So I guess the first step is to admit you have a problem.

I’ve had several requests recently to address the use of “trailing periods” at the end of sentences. Hence, this post.

Hello, Judith. Thank you for providing your Business Email Etiquette site – it is a resource I wish more would take the time to review. I have a silly question for you that I thought I would get your input on. I have an associate who finishes her phrases with “…..”. What does this mean? I find it very annoying as if they have something else they want to say but won’t. Is this proper Netiquette?

Ending a phrase or sentence with “. . .” could mean different things depending on the content and tone of the email in question. A proper ellipse is a period at the end of the sentence, then “. . .”.

So your associate is apparently not even ellipsing — she’s just not completing her thoughts. Unfortunately, using ellipses in this manner does not lend to professional communications or clarity if done all the time.

At the end of every sentence, doing this is inappropriate and leads to cryptic communications. Like anything that has to do with using technology, discretion is vital.

In the example above, I think it means the opposite of having something to say but won’t. I think she just doesn’t know what more to say. When I do this, it indicates that I don’t know what more I can say on the topic.

For example, I’ll use trailing periods when I keep getting asked the same thing in different ways by the same person as though that would change the answer. So, I’ll end the sentence with “. . .” insinuating “what more can I say . . .” or “I’m at a loss . . .” type of situation.

I don’t believe this is an email etiquette issue as much as an issue of not communicating with clarity. For example, one should use ellipses sparingly — not at the end of every single sentence or thought.

If you are concerned, why not ask your associate who does this in her communications what she means? For example, “I was just wondering, why do you end all your sentences with three periods?” I would be interested to know her answer too.

In decades of writing and using ellipses, I never have had anyone are with me that they are confused by my intent. Nor have I had anyone ask me what I meant. That said, I do make a point of making sure my communications are clear: ellipses or no ellipses. 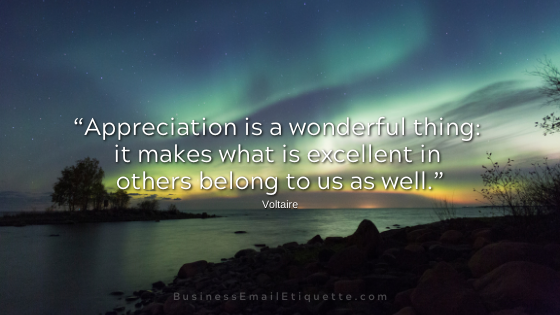